QLED vs OLED: Difference between both technologies and which one is better.

September 07, 2019
The previous blog highlighted the technology and working of OLED and QLED televisions. If you have not checked that out click on this link to know about it. 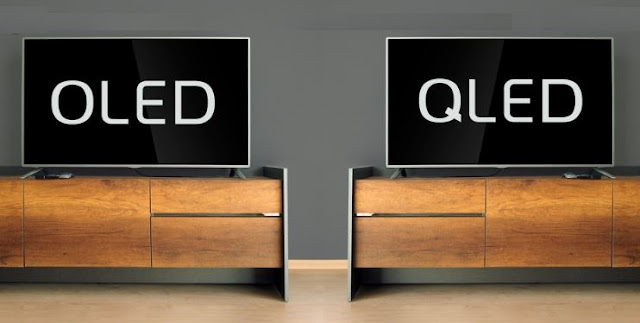 Black levels and contrast:
The difference between the brightest and the darkest part of an image is known as contrast. So if your TV can make true dark blacks then it does not have to work hard on making brighter parks extra bright to achieve good levels of contrast. Due to this reason, OLED reigns as the undisputed champion because of its ability to go completely black when it needs to.

Whereas QLED TVs are forced to dim their LED backlight and block the light, which is very hard to do perfectly. Due to this reason the issue of “light bleed” (as the light spills onto what’s supposed to be a black section of the screen.) is most common in these type of TV’s.

Brightness:
Well in this area the QLED TVs have a considerable advantage because they use separate backlightthat can be made incredibly bright. Due to this reason you can enjoy a picture quality so bright that can be seen clearly in even most brightly lit rooms.
OLED panels doesnn’t even come close in the matter of brightness. This is due to the inability of light-emitting individual pixels to produce enough amount of light. So in brightly lit room you can face a problem with the brightness. Also HDR experience can be a bitter in OLED TV’s.

Color Accuracy:
There was a time when OLED blew away the competition in terms of picture quality. But with the use of quantum dots in QLED TVs they have stepped forward in terms of color accuracy, wider range of saturated colors at extreme brightness levels are an advantage. Well we would say both the technologies deliver same amount of color accuracy until we get a solid evidence regarding mind-blowing color accuracy of QLED panels.

Viewing angle:
This has been a limitation of  all LED TV’s and  this has been carried forward to QLED as well. Manufacturers have made best efforts to enhance viewing angles but still the difference is noticeable.
OLED screens were popular due to their incredible viewing angles, these can be viewed with no luminescence degradation at drastic viewing angles — up to 84 degrees.

Power consumption:
OLED panels are extremely thin and require no back-light thus they are much power efficient than its rivals.

For now OLED TV's have more advantages and are leading the television industry by storm, but Samsung see lot of potential in QLED and are ready to launch TV's with micro LED technology. Well this technology is new and need some time to mature, and who knows one day QLED surpass OLED technology that use of OLED will fade away.