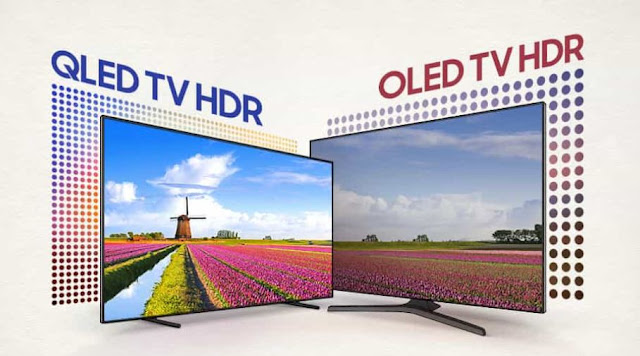 If you’re browsing higher end 4K TVs, you’ve likely stumbled upon two similar-sounding terms: QLED and OLED. Both OLED and QLED are similar in sense that they both are based on LED screen, though their internal composition is a little different. QLED is latest technology innovated by Samsung, these type of TVs display picture using quantum dots (which is covered later) that are illuminated by a dazzlingly-bright LED sheet. Whereas the OLED TVs are made up of millions of individual organic light-emitting diodes.

Although Samsung is the brainchild of QLED technology but it did not blocked the comptetion as it allowed a number of manufacturers, includung Hisense and TCL, to license the tech through its self-formed QLED Alliance.

WHAT IS QLED?
If explained in layman’s terms, QLED TVs are LED TVs that use quantum dots to enhance performance, delivering better brightness and a wider color spectrum, according to Samsung. This is because the dots almost act like a filter when applied on top of LED back-light, producing a purer light than an LED can provide.

Since its introduction Samsung is betting big on QLED and it has stopped producing OLED TVs. Samsung is against OLED so much that it is also building its competitor technology called MicroLED. 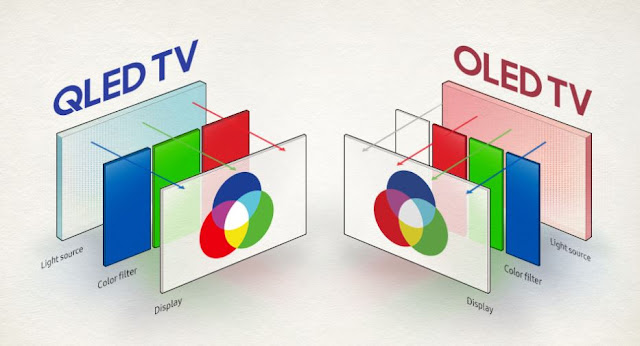 QLED isn’t an emissive screen technology because quantum dots don’t directly emit the colors you see instead they are spread on a piece of film that acts as a color filter. On turning the screen on the LED backlight beams through the film, which refines the light to an ideal color temperature. Since QLEDs aren’t emissive whereas LED back-light that illuminates the screen is on at all times, therefore QLED struggle to achieve same level of deep blacks as OLEDs.

WHAT IS OLED?
OLED tech is easy to explain as there is not much difficult tech behind an OLED TV. For starters OLED stands for organic light-emitting diode and a OLED TV consists of millions of OLEDs, which take form as individual pixels. These are also called emissive display technique because each lighting up individually when fed electricity.

This is the reason why OLED are able to achieve deep blacks, because when an individual OLED pixel isn’t being fed power it’s shut off and thus appears completely black as if the TV is turned off. However QLEDs don’t have that luxury because they require an entire LED backlight to feed light through the film, so they use software to dim sections that should be black.

That's all for now advantages and disadvantages of both the technologies will be covered in another article.