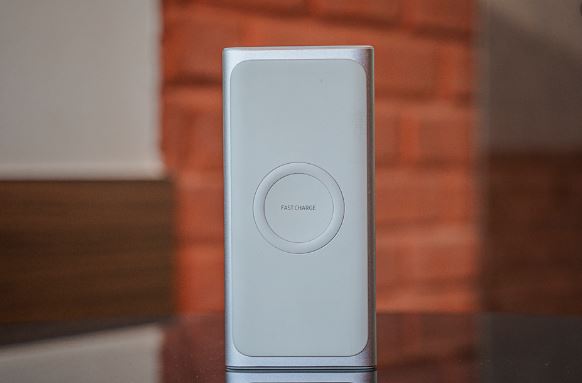 Today's world have become so much hard user of mobile phones that they run out of juice. To tackle this problem power banks were developed and we have seen surge of power bank shipments in 2019. While power banks are common there are few wireless power banks from reputed manufacturers.


For wired charging, the power bank can output at 5V/2A, 9V/1.67A and 12V/1.25A. The maximum output is 15 watts which is quite good for Samsung phones because majority of them support max 15W input. The power bank supports Qualcomm Quick Charge 2.0 and Samsung Fast Charge protocols.

We did quick tests first with the wired charging on galaxy S10 plus. The device has 4000mah battery and managed to charge from 0 -100 in 90 minutes, this is same amount of time as taken by using 15 Watt charger.

For wireless charging tests, we again used S10 plus which supports Samsung wireless charging 2 technology, the Samsung's Wireless Fast Charge standard. It took 3 hrs to fully charge the phone. Also this power bank can wirelessly charge phone only once. Because half the energy goes into air due to poor energy conversion. It we use wire then we can top-up S10 Plus twice.

The design of power bank is excellent and feels premium in hands, it's made out of an aluminum shell but the front has a rubberized plastic cover for the wireless charging feature to work. The power bank can be charged using USB-C port and has a USB-A port for outputting power. There is also a button which shows you remaining power by blinking the four white LED and another to denote if the power bank is on or off. The button also starts wireless charging but it stops automatically if no device is kept on the power bank.

The power bank is capable of charging two devices simultaneously, one wired and one wirelessly. This will reduce the rate of charging for both modes but if you have, say, a Galaxy S10 and a Galaxy Watch then you can charge both together if for some reason you find them both out of charge at the same time.

The Samsung Wireless Power bank is priced at $59.99 / INR 3699, which is expensive for a 10000mAh power bank with 15W wired charging. However, the wireless charging adds an extra dimension of practicality to the device, which is lacking on most other power banks.

However, the wireless charging is too slow to be used with non-Samsung products but if you have a recent Samsung Galaxy S-series or Note-series smartphone or any one of their smartwatches then you can expect to get good charging speeds even in wireless mode. In that case, the Samsung Wireless Powerbank is worth the extra premium.
More Detailed review can be found in following video: https://www.youtube.com/watch?v=qtJ6xaZ_NLc&t=57s&ab_channel=TechnoTamber