What is WiFi 6? The Fastest WiFi Technology! 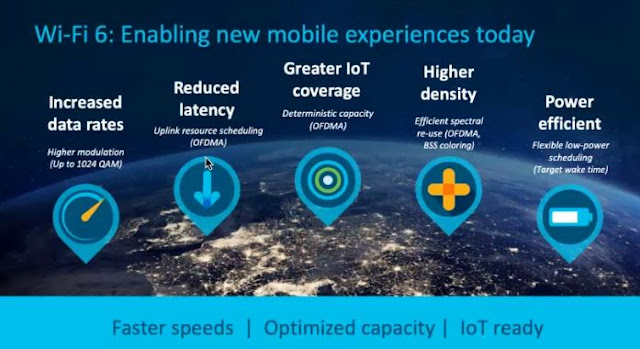 Wi-Fi 6 is the next generation wifi technology that is much faster than previous Wi-Fi 802.11 ac. Its main focus is to provide the faster inter-connectivity in congested areas, therefore it will reshape the way router handles the growing demand of users.

Faster internet is the basic requirement of IOT because with this the inter-connectivity of devices will increase tremendously. It is predicted that number of inter-connective devices will double in next 5 years. Thus there was a need of new Wi-Fi technology.

How Fast is Wi-Fi 6:
Well this question will lead to debate among people. The initial industrial trails have reveled that Wi-Fi 6 will offer speeds that are 30% faster than previous Wi-Fi 5. There will be maximum theoretical maximum transfer speeds up around 10 Gbps. The actual real life speeds may differ depending upon the number of  devices connected and most importantly the ISP you are using and type of connection you have. If you are suing fiber connection then you can enjoy the true speed.

When will Wi-Fi 6 be available:
Wi-Fi 6 is already available in flagship smartphones and Galaxy S10 was the first device to use one. Slowly the routers are being available which are wi-fi 6 certified and the market is adapting towards new standards. To enjoy the benefit of Wi-Fi 6, you will need both Wi-Fi 6 router and Wi-Fi 6 enabled device.

You'll need both a Wi-Fi 6 router and Wi-Fi 6 devices like those in order to reap the full benefits of 802.11ax, but if you go ahead and get that fancy new router, your older devices will still work like normal. The rub is that they won't be much faster, if at all -- Wi-Fi 6 supports previous-gen 802.11 devices, but it can't do much to speed them up.

How Wi-Fi 6 Battles Congestion:
Wi-Fi 6 divides a wireless channel into a large number of subchannels, which previous technology was unable to do. Each of these sub-channels carry data intended for a different device. All this is done through technology called Orthogonal Frequency Division Multiple Access. Additionally The Wi-Fi access points can talk to more devices at once.

There is also improved version of  MIMO—Multiple In/Multiple Out. This involves multiple antennas, which let the access point talk to multiple devices at once. in Wi-Fi 6, wireless access points near each other can be configured to have different Basic Service Set (BSS) “colors.” The number between 0 and 7 represent color. When device is checking whether the channel is all clear and listens in, it may notice a transmission with a weak signal and of different “color.” It then ignores this signal and transmit anyway without waiting. Technically this will improve performance in congested areas, and is also called “spatial frequency re-use.

Wifi 6 bring lot of improvements under the hood, the increased speed and many more. It will be worth observing the absorption rate of it and how fast manufacturers start implementing it in their devices.