March 31, 2019
Tesla is storming the market with its amazing products. The latest iteration in Tesla lineup is Tesla Model Y. This SUV does-not look boxy like SUV's of its rivals but looks like its increasingly popular SUV coupe ie Tesla Model 3.This is a crucial car for Tesla as its success will shape companies future. 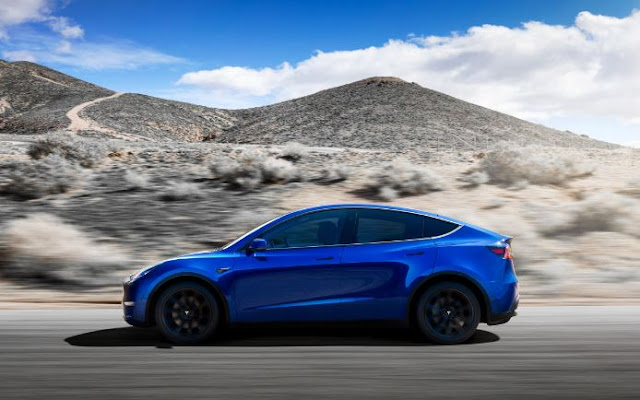 Overview:
Since the Tesla Model Y reveal, there’s been a lot of chatter about whether Model Y is an SUV or CUV. It does mot look like SUV due to its looks as they are not of old school but have a very similar shape and size of (Mercedes GLC Coupe and the Porsche Cayenne Coupe) to two notable premium sports SUVs currently sold worldwide.

The Tesla Model Y is the most streamlined and aerodynamic iteration of the category. It has very low drag coefficient making it the most energy efficient car.

Interior Space:
This is the seven seater car by Tesla and has ample space for front and middle row passengers. However there is not much of rear legroom and space for rear passengers. We don't know who can fit in that space, probably it is for small children who can sit there. If we compare it with its competition then  interior space is a significant win for the Tesla Model Y.

Much of the interior space is made due to no engine and motors are connected to the tyres. This helps to enhance the space in low dimension car.

Safety:
If safety is in your mind then don't worry, Tesla makes the world’s safest passenger vehicles, with the lowest chance of injury, by objective measures. Model 3 scored 5 star in passenger safety and since this car is derived from Model 3 we can safely assume that Model Y will offer similar safety.

Also with its low center of gravity the strong steel frame the car is able to absorb much of the impact making it safest car you could be in. And don't forget autopilot that you can get which will keep the car in lane while cursing in the highways.

Performance:
This is the area where gasoline powered cars struggle due to limitations of engines. They are not able to produce consistent torque and bhp. The electric motors on the other hand have no such issue as they give consistent torque Ir-respective of motor rpm. Therefore the Model Y is able to give class leading numbers such as 0–60 mph in 5.9 seconds, which is about the same time as the base variant of the Porsche Cayenne Coupe (which costs almost twice as much, see below).

Top end variant of Tesla Model Y Performance ($60,000) will make the 0–60 mph sprint in 3.5 seconds. Another good this is that the performance/accelerations of Tesla cars can be increased be software update overnight. So next day you will be able to get more out of your car than previous day.

As mentioned above, the Tesla also has a much lower center of gravity. Thus car is more stable and you fell much more confident around the corners.

Value for Money:
The Tesla cars are true value for money cars. Gasoline powered cars are very thirsty and take much money from your pocket. Also Tesla cars have low maintenance cost and can run million kilometers with any issue. Charging these ares are not much of issue with supercharger V3 network you can get 100 miles in 10 min charge which is quite impressive.

So if you want to buy a new mid-sized SUV coupe from 2020–2021 and onward, the Tesla Model Y is a great choice all around. It’s more spacious, safer, has better performance and response, and is far better value than the cars in its price segment. Also it offers superior performance than most of rivals which cost double the amount than Model Y.