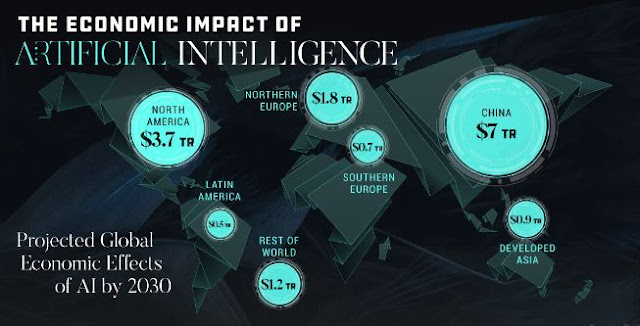 With the increasing population the number jobs are decreasing day by day. Therefore mostly people find themselves Jobless even after years of hard work. When this situation arise in a country, look for implementing new policies to help its citizens. Information Technology (IT) is one of the fastest growing industry and thus creating millions of jobs every year.

Here are the five common economic effects of IT.

1. Direct job creation
The IT sector is one of the largest employer worldwide and is expected to retain its top position in near future. In the US alone, IT jobs are expected to grow by 22% up to 2020, creating 758,800 new jobs. In Australia super-fast National Broadband Network alone creates 25,000 jobs annually. Nowadays for each one job in tech industry, five additional jobs, on average, are created. So with increasing technology, emerging markets and innovations will create millions of jobs in near future.

2. Contribution to GDP growth
Various surveys in different countries showcased that IT sector has direct impact on economies growth. For example, with just 10% increase in broadband penetration the GDP growth is 1.4 % in emerging markets. In some countries such as China and India, this number can reach up to 2.5%. The increasing use of 4G mobile data has boosted connections and inter-connectivity and have increased GDP growth by 2% globally. With more inter-connectivity there is  3.4% of overall GDP in some economies. This is due to e-commerce people advertising and selling goods online.

3. Emergence of new services and industries
With inter-connectivity the public services are now become available online through mobile phones. The transition of world to cloud computing is one of the key trends for modernization. Many developed as well as developing countries have started shifting their infrastructure to cloud. This increases jobs availablity in the market.

4. Workforce transformation
New “microwork” platforms have been developed by multiple companies such as oDesk, Amazon and Samasource. This helps in dividing tasks to small components which can be outsourced to contract workers.  The contractors are mostly in emerging economies. This helps entrepreneurs to significantly cut costs and get access to qualified workers. In 2012, oDesk alone had over 3 million registered contractors who performed 1.5 million tasks which increased economy of the outsourced country. IT has also contributed to the rise of entrepreneurship, making it much easier for self-starters to access best practices, legal and regulatory information, and marketing and investment resources.

5. Business innovation
In developed countries more than 95% of businesses have an online presence. This is because the internet provides them with new ways of reaching out to customers and competing for market share. Nowadays social media is a powerful marketing tool, they help in streamline business processes and improve efficiency. With inter-connectivity, the world has created new ways for businesses to serve their customers.

Thus technology is impacting economy of the countries in a positive manner. This trend is going to continue and developing countries are going to be benefited the most from this.