What is Near Field Communication: Explained

September 23, 2018
NFC i.e. Near Field Communication is a way of communication between two electronic devices one among which is mostly a portable device such as smartphones. These devices can communicate with each other when brought within 4 cm of range. NFC is being used in various ways such as sharing photos,  making mobile payments, getting information of posters etc. This process requires atleast one of the devices involved to have internet access. 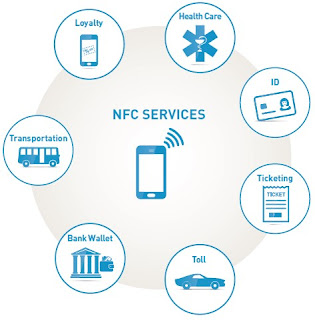 This is a short distance wireless mode of communication which involves two devices : Active device and Passive device.

NFC Reader/Writer:
In this one device is active and other device is passive. In this user access the information from the NFC tag using Smartphones. Active device reads/writes the data to NFC using the principle of electromagnetic induction. NFC device sends the radio waves at carrier frequency of 13.56 Mhz. Whenever the active device is brought withing the range it generates radio waves which are detected by the chip in passive device which in turn generates power for chip and activates it for transferring the information stored in it. Once the device is powered up the chip responds back by the technique known as Load Modulation. In this technique the tag uses internal clock of chip and generates auxiliary frequency of 848 khz.

NFC Card emulation:
This is similar to NFC reader/writer in which one device is portable such as smartphones and are mostly used for making mobile payments. Both the devices involved are active devices. In this our smartphone work as passive smart card, therefore do not generate radio waves and responds back to requested data by payment terminal. Its operating principle is similar to reader/writer mode.

Various Applications of NFC:
NFC is being used for profile sharing, pairing different devices, mobile payments, information sharing using smart posters and business cards, home automation, health care, library systems and personal usage etc.
Just by using NFC brightness of embient lights in room can be changed. It can be used for changing the temperature of the AC as well as in auto close doors.