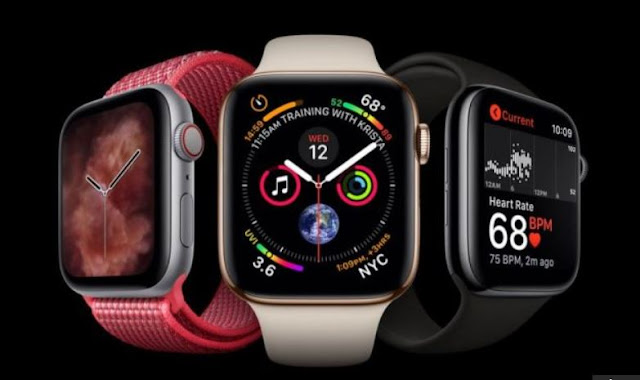 Smartwatches and wearable sales were stagnant from past two years, because the innovations in this area were not enough. With smartphones developed at a massive pace, every six months we see new innovations in smartphone sector thus their sales are increasing day by day. So there was urgent need to improvements in smartwatch sector and Apple true innovator brought something incredible in its latest Watch series 4.

The new Apple Watch has same design language as previous one, but thanks to edge to edge display you get more visible screen making screen 30 percent larger. Also size has been bumped a little to 40mm and 44mm sizes (compared to 38mm and 42mm for older watches).

Apple’s direct control over the hardware and software are helping it to serve its devices well, it lets Apple to make devices more faster as well as efficient. Apple introduced S4 chip which is made specially for smartwatches. It is dual-core chip designed by Apple combined with improved software helps to make it more faster than previous generation watches. Meanwhile, Qualcomm launched Snapdragon 3100 for Wear OS wearables.

Wearable's are more focused on health monitoring of a user and Apple brought major innovation in this section. It features new sensors which helps in fall detection and it contacts your emergency contacts, if don’t get up again after about a minute. Also there is built-in EKG (electrocardiogram) to screen for heart rhythm irregularities. This feature is FDA certified which lets this watch to be sold as a medical device as well.

Battery life was major concern and that is unchanged in this generation watch. You can squeeze out 18 hours of mixed usage. Coming to price which is deciding factor for many people, the Apple Watch Series 4 is still expensive with a starting price of $399. It will be worth noting how many people buy this new watch as it is better than series 3 in all aspects.