June 24, 2018
The Jaguar I-Pace has futuristic design to shred its electric opponents to dust. With 298 miles between recharges and 0-62mph in 4.8 seconds, the I-Pace makes for a superb all-rounder. As good to drive as it is to look at. 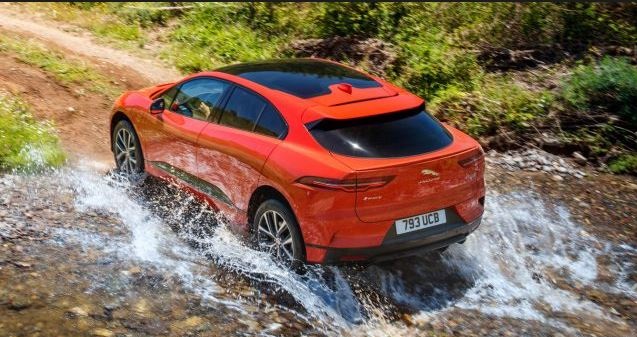 Jaguar as the name sounds develops cars with amazing technology under the hood and are known for their world class safety features. Back in 2016 Jaguar design chief Ian Callum gave his team more freedom to design a car. Now after two years of development the 2019 I-Pace is ready to hit the floor.

The I-Pace does not use six cylinder engine or doesn't have long hood or is noisy. It is a car which have developed with upcoming era and now this is the car which will give Tesla a serious competition as it's Jaguar’s first battery driven electric  vehicle.

What’s it like on the outside?:
This car does not look like any other Jaguar models, it has futuristic design. Car is marketed as  SUV but it does not look like one. It has bluff nose, low roof and 4.6m length over a near-three-meter wheelbase make it look like hatchback rather than SUV. Even with this the car gives strong presence. The 22-inch wheels on car upwards the style quotient of the car.

Car is modern as vanes on the grille only open when cooling is required so as to redirect air to the large bonnet scoop for smoother air flow over the body. Air is also channeled through openings in the bumper to reduce drag and turbulence. The car does not have rear wiper but it does not need one as it has some sort of coating that protect it from water drops.

What’s it like on the inside:
I-Pace is not an ordinary vehicle, The interior has less futuristic design than the exterior.  The car features flight deck equipped with trio of screens. Its analog instrument behind steering wheel is replaced by 12.3 inch. It has 10-inch screen that displays the infotainment system and another 5.5-inch unit for replacing buttons. The I-Pace comes standard with Apple CarPlay and Android Auto compatibility.

It also has electric car-specific functions to the infotainment system such as it  helps users find the nearest charging stations. Jaguar has developed a smartphone application which lets owners remotely monitor the charging process and also pre-condition the car. You can even set your office leaving time and app will ensure your car waits for you with cooled cabin according to your preferences.

Ample of Storage:
Since there is no engine therefore it has 27 liter storage under the bonnet which Jaguar designers calls 'The Froot'. In the rear Boot space is a massive 656 liters with the rear seats in place. Car has rear motor residing under the boot floor so there is not space of spare wheel. There’s lots of storage in the cabin, too, with a recess under the arms of the lower portion of the center console, as well as a sizable 10.5-liter compartment between the front seats.

Quick and Silent:
It has battery system under the floor similar to Tesla as , its long wheelbase provides a space for housing the 90 kWh lithium-ion battery and is tucked in aluminium casing. This helps in lowering center of gravity of the car as well and aluminum casing increases structural rigidity of the car.

Electric motor is developed in house which supplies 197 hp and 256 lb-ft of instant torque to each axle, ensuring at the same time optimal weight distribution between them. This helps quick acceleration and it can go from 0-100 in just 4.8 seconds and it achieves top speed of 250 km/h. It has stable handling of sports car and off roading capability of an SUV.

This price range make car really competitive with Model X which too is SUV but nearly $80,000 more expensive I-Pace having similar power capabilities.