How to create a Gift card for your Loved One's

June 20, 2018
Greetings are still sent via cards to special ones. Gift cards are the ones which can be given any time on any occasion. So here is one more kind of card which you may like gifting to others.

What we need:
- Sheet of paper
- A pair of scirros
- Glue 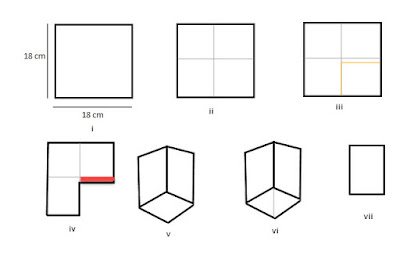 Steps to Reproduce:
1. Take a sheet of paper of size (18X18 cm).
2. Fold it inward vertically and horizontally as shown in figure ii.
3. Cut it along the yellow lines shown in the figure iii.
4. Paste the area marked as red in figure iv to the other end and it will appear like figure v.
5. Then make an invard fold along the grey line shown in figure vi such that the figure closes to look like figure vii.
6. Now make four other similar figures and paste them back to back.

The card is ready and get ready to rock.