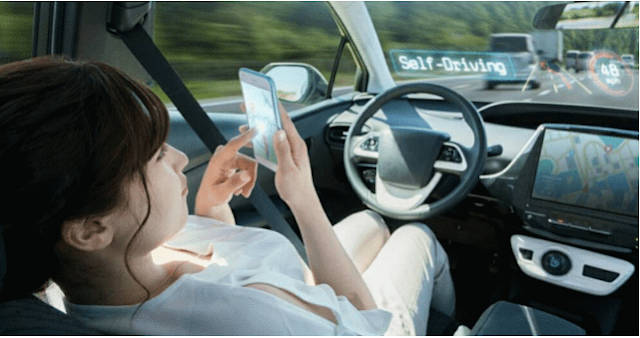 Selfdriving cars revolution is underway and autonomous vehicles is buzz for major car manufacturers. Autonomous vehicles were dream and were only seen in sci-fi movies but this dream is now becoming a reality. By autonomous cars we mean that we just hop in the vehicle and it takes us to our destination. But not all autonomous cars are created equally there are different levels of autonomy. The concept of "Autonomy Levels" was established by the international Society of Automotive Engineers (SAE) in 2014, as part of its report, in which the industry body began to develop a language we could use to talk about in this burgeoning field.

So six levels of autonomy were revealed by this report that automakers would need to achieve, for building the no-steering-wheel self-driving bubble pods of the future.

So automakers are following SAE standard and following are 6 levels of autonomous vehicles.

Level Zero (No Automation):
Most vehicles nowadays are at this level. In this Acceleration, braking and steering are all controlled by a human driver at all times. There may be warning tones for safety or The car may have some automated warning tones and automated emergency braking. These all are considered as level 0 Automation.

Level 1 (Driver assistance):
In this level of autonomy the car can take over steering or throttle and braking but never both. Best example for this is cruise control or parking assist features. In this the computer is never in control of both steering and braking/acceleration.

Level 2(Partial assistance):
There is saying Hands off the wheel but eyes on the road. In this car can take control of wheels and pedals bu only in certain conditions. The driver is still responsible for monitoring the surroundings, traffic and road conditions also has to be alert all times and be ready to take over the control of the vehicle. Tesla Autopilot has been on this stage since 2014. This is a suite consisting of driver assistance technologies including Traffic Aware Cruise Control and Autosteer with lane change, which enables automatic steering on undivided roads but with speed restrictions.

Level 3(Conditional assistance):
Hands off the wheel but eyes off the road – sometimes. In a level 3 vehicle, the car has certain modes that will fully take over the driving responsibilities, under certain conditions, but a driver is expected to retake control when the system asks for it. This car can respond to dynamic incidents on the road and decide when to change lanes, but it uses the human driver as the fallback system. These are dangerous waters in terms of liability, and automakers are more or less trying to skip over it and move straight to level four. The new Audi A8 is the first production car to have Level 3 autonomy. At the push of a button, the A8′s AI Traffic Jam Pilot manages starting, steering, throttle and braking in slow-moving traffic at up to 60km/h on major roads where a physical barrier separates the two carriageways. Driver is alarmed to take charge over driving when the system reaches its extreme.

Level 4 (High automation):
Level 4 automated cars can drive themselves with a human driver onboard. The car takes control of the starting, steering throttle and braking as well as monitoring its surroundings in a wide range of environments and handling the parking duties.

In appropriate conditions, the driver can switch the car to autonomous mode and sit back, relax and take their eyes off the road. When the vehicle encounters something that it cannot read or handle it will request the assistance of the driver.

However, even if the driver does not intervene and something goes wrong, the car will continue to manoeuvre autonomously and park itself and put its passengers in no danger if human help isn't forthcoming. At this point, you're looking at a true self-driving car. These cars are purely self-driving and the Google/Waymo self-driving vehicle has been operating at this level of autonomy for few years.

Level 5 (Full automation):
At this level, the vehicle needs no human control at all. It doesn’t need to have pedals, or a steering wheel, or even a human onboard.

The car is fully automated and can perform all driving tasks on any road, under any conditions, whether there’s a human on board or not.

These levels are a handy way of tracking the way we are making the transition that will have enormous unintended consequence for the way we work, live and travel in the future.