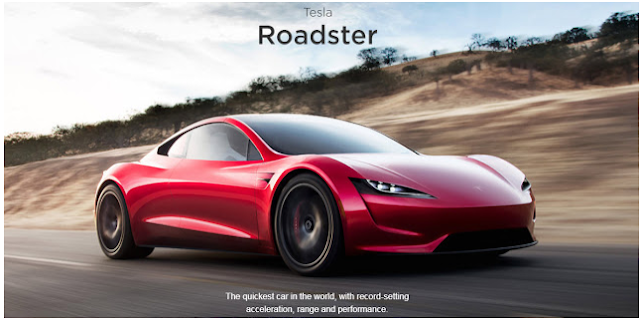 Since the production of Roadster first generation everyone questioned Musk about the second generation Roadster. To their answers Musk unveiled it during Tesla Semi launch and surprised everyone. According to Musk base model of car will do 0 to 100kmph in 1.9 seconds making it the fastest production car and also first car to break under 2 seconds record. It would travel quarter mile in mere 8.9 seconds . More importantly, it is four seater car and rear seats will have enough space for kids to sit.

Currently Koenigsegg Agera R is worlds fastest production car. It is powered by twin turbo aluminum 5,0L V8, engine that produces power of 1160Hp  and 1280 Nm torque, but this is nothing  in front of power of electric motor powering Roadster. According to sources Roadster will be heavy car due to its battery pack, but it will come in favor of car as this ill make car stable with improved center of gravity.

The car will have 200KWh battery pack and would give range of 1000 kilometers in single charge making this car to be first electric car with so much range. For this to become reality Tesla will have to bring new battery tech. All these are just numbers and we cannot be so sure about these until its first production car is unveiled.

According to Musk, production of car will begin in 2020, but as we know these deadlines are optimistic. Tesla has been known to delay the numbers when time arises. If you want to be the first one to own roadster then you can reserve car by paying $50,000 towards $200,000 base price. The top models will cost around $250,000.