Samsung Pay: What is it, how does it works. 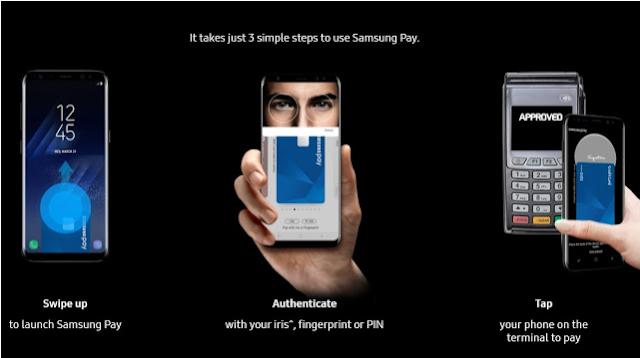 It has been for a while we have been using plastic cards as mode of payment. All we needed to do is swipe the card and payment is done. As we are carrying multiple cards it becomes difficult to carry all of them and as mobile payment system is growing Samsung wants its own mobile payment system, known as Samsung Pay. It will replace all plastic cards in your wallet. It works in all stores including older magnetic strip point machines.

Since Android Pay and Apple pay use NFC for communication at payment terminals, this requires retailers to upgrade the hardware of machines to accept contactless payments. So recognizing this need Samsung used different approach by encompassing all that Android Pay has to offer and adding additional support. Samsung pay supports MST know as Magnetic Secure Transmission, thus it can accept payment in the readers which require swiping cards.

Samsung Pay was introduced with Galaxy Note 5 and now all mobile phones launched by Samsung support this tech even gear S2 and Gear S3 support Samsung Pay. It supports Visa, MasterCard, Discover and American Express cards. All you need is to download Samsung pay on supported device, then register the desired cards you want. To use Samsung pay swipe the home screen from bottom to top and Samsung pay will launch. All you need is to authenticate the payment by your fingerprint. You can save multiple cards so swipe left or right to choose from the list of desired saved cards. Once you have been biometrically authorized just tap the phone to contactless payment terminal and bingo your payment is done. Payment is done using NFC: Near Field Communication.

Samsung Pay is also capable of doing payments on terminals which do not support NFC. LoopPay was acquired by Samsung which is a startup that invented a mobile wallet technology called MST (Magnetic Strip Technology). Thus phone is capable of sending payment information in terminals that have the old-fashioned magnetic strip reader.

Additionally Samsung pay is secure as all details are protected by Samsung's Knox, real-time hacking surveillance and rooting prevention system, as well as no card details are saved on Samsung server or the device itself. Samsung Pay uses concept of tokenization in which, Card payments are made secure by creating a number or token that replaces your card details. This token is stored on your device within a secure element chip, and whenever a payment is initiated, the token is passed to the retailer or merchant. The retailer therefore never has direct access to your card details.

So Samsung Pay is leader in mobile payments system beating Apple Pay and Google Pay even major banks and countries are supported by Samsung pay.