Net Neutrality: Everything you need to know. 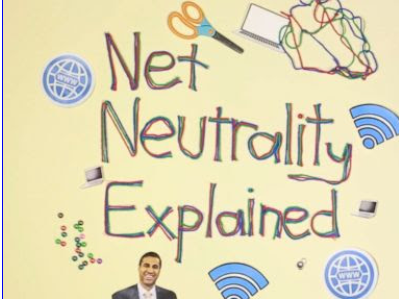 Net Neutrality is principle where Internet Service Providers have to treat all the data on the website equally i.e. hindering them from charging differently for various websites, content, platform applications or method of communication from different users.

The term Net Neutrality was coined by Tim Wu, professor at Columbia University in 2003. One of the example of violation of Net neutrality principle is Comcast, America’s global telecommunication conglomerate, the largest broadcasting and cable television company in the world. Internet service provider Comcast throttled the uploads from peer-to-peer file sharing applications using forged packets. Comcast illegally inhibited it users from using the high speed Internet service from using the popular file sharing software Bit Torrent. This is an example of discrimination by protocol i.e. favoring or blocking information based on aspects of communication protocols used by computers to communicate.

Another factor leading to violation of Net Neutrality is Discrimination by IP. Sometimes ISPs charge one company and not the other for the traffic they cause on ISP’s network. Orange, French Telecom Operator, complained that 50% of the traffic on its network consists of Google and YouTube only. They made a deal with google where the charged Google for the traffic incurred on the Orange network. Examples include Facebook Zero and Google free Zone.

Favoring Private Networks: This allows ISPs to favor their own private networks over the others. Like Comcast signed a deal with Microsoft where it allowed its users to stream television through the Xfinity app on their Xbox360s without affecting its bandwidth limit. While using other streaming apps such as Netflix, HBO Go etc compromised the network limit.

Strong public opinion led some governments to regulate broadband Internet providers as public utility like gas, water and electricity. The United State supported this view from 2015 and on December 14, 2017 FCC voted to repeal Net Neutrality.