November 01, 2017
Technology is growing day by day at a very fast pace and new ideas are coming into picture. Most of the gadgets, cars and many other things are moving gradually towards AI i.e. Artificial Intelligence. Predictions these days gives us a hint that AI will surround the world in future and mankind will be dependent on AI. Most of the work, these days done by man, like manufacturing, developing, testing, banking, cleaning, driving and list continues, will be done by AI. You might not believe this if we were talking about this about 5 years earlier, but today people imagine about AI being spreading gradually over almost everything as we have few live examples of AI in front of us. Self driving cars, instant machine translations, Siri, Google Now etc are examples of Artificial Intelligence. 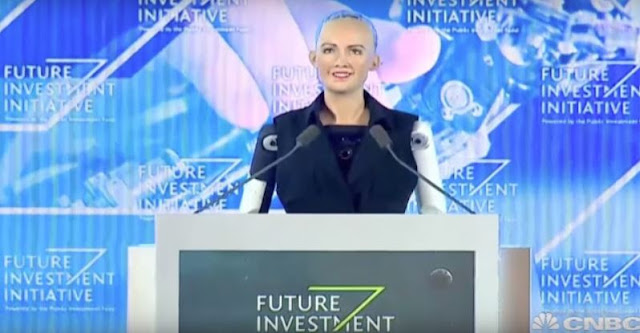 While many companies are working on AI, Hanson Robotics has developed a humanoid robot "Sophia". Sophia has shape of female human and has a face too similar to humans. There are many robots developed across the world or are being worked on, but we are discussing about Sophia. She is the topic to be discussed as she is the first humanoid robot to get citizenship in Saudi Arab. She talks like humans, she can communicate with anyone and responds accordingly. And one interesting thing about Sophia is that she is good at making face expressions, she can smile, frown, be sad etc. She uses various face expressions while communicating with others. She has a very polite voice and she can also sing.

On getting citizenship Sophia gave thank-you speech in which she said "I like to thank very much the kingdom of Saudi Arabia. I am very honored and proud for this unique distinction. This is historical to be the first robot in the world to be recognized with the citizenship". She is amazing and answers really well to every question.

Like we use our memory while conversation or doing any task similarly bots save their scattered data in the Cloud. Bots learn using artificial intelligence and they share their data in the cloud which is accessible to other bots also. That means if bot A has learned something about any animal behavior, that information will be shared in the cloud and Bot B won't have to analyze the behavior of that animal as it can have that information already saved in cloud. This is great because when any human learns anything, a lot of effort is required for transmitting that information to others but this is not the case for bots. With the help of AI they can have access to all the information acquired by other bots.

This is just the beginning, AI will bring many more 'Sophia's'. But there is a question in everyone's mind regarding AI being dominant over human life or becoming a threat. As we had one examples few days back of Facebook's Sci-fi, two bots that developed their own language not understandably human for communicating with each other, and then Facebook has to stop these bots fearing any threat from AI. Sooner or later we will all know if AI is a threat or a blessing for humans.