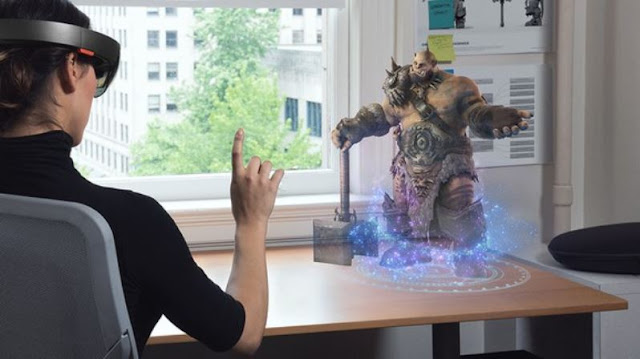 Video games and computer games have been entertaining us for a long time. Computer graphics have become sophisticated with time, and game graphics are pushing the barriers of photo-realism. Now as technology is moving ahead so does innovations. New technology has evolved under hood which is amazing everyone and is called Augmented Reality. This tech is so popular that worlds top mobile makers Apple, Google are working on it and Apple's new devices iPhone 8, iPhone 8 Plus and iPhone 10 support this tech.

Augmented reality mask computer-generated video onto camera-captured video in such a way that the CGI objects appear to have an absolute location in the real world.

Augmented reality, soften the line between real and computer-generated environment by enhancing what we see, hear, feel and smell. Augmented reality apps are written in 3D programs which allow the developer to tie animation or contextual digital information in the computer program to an augmented reality "marker" in the real world. When a computing device's AR app or browser plug-in receives digital information from a known marker, it begins to execute the marker's code and layer the correct image or images.

Augmented reality is categorized in various categories, each having differences in objective and application use cases. Below, we explore the various types of technologies that make up augmented reality:

3D viewers powered by Augmented Reality allow users to place life-size 3D models in your environment with or without the use of trackers. Trackers are simple images that 3D models can be attached to in Augmented Reality. Augmented Reality browsers enrich your camera display with contextual information. For example, there are some apps which let you point smartphone to building to display its history or estimated value.