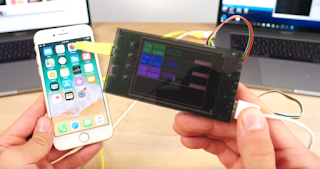 Everyone is protective for their personal data and have 4 digit pass-code on iPhone. We think that its secure and no one can access our personal data but as they say software can have loophole and contain vulnerabilities which can be exploited by hackers. Recently Microsoft became part of wanna cry ransomware and half of the world was affected. Now there comes a device which can crack your iPhone password in mere 50 seconds.

Recently, a new EverythingApplePro stated that the Chinese gadget is capable of simultaneously and quickly picking up passwords on three iPhone. Fortunately for most, that thing works only with the iPhone 7 and 7 Plus. But it requires extreme parameters to work in timely manner.

The device contains 3 USB ports and is of fairly compact size, this device puts at risk all iPhone 7 and 7+ models running any version of iOSbetween 10.3.3 and 11 Beta. If you are running older version of iOS then attacker will have to import the iOS 10.3.3 firmware to your phone. And the scaryPart: While you would usually need to enter your passcode to update, the gadget comes with a software that automatically bypasses this step

The principle of operation is simple: it is banal brute forcing, that is, automatically going through all the possible numeric combinations. But do not hurry to issue a sarcastic “pfff!”: the device is supplied with a user manual how to bypass the erase phone after 10 failed attempts.

It turns out that if you install on an iPhone in DFU mode and before the first start you will be asked to enter the passcode, in this situation the “rule of ten attempts” doesn’t work. At this point, comes into effect Chinese gadget, that can crack a four digit password in less than a minute. The six digit passcode (now the default on iOS devices) that had not been changed recently would take approximately 9.5 years to be cracked. According to Apple, the behavior that allows the box to work has been patched as of iOS 11 beta 4.