August 25, 2017
Galaxy Note series are the devices made by Samsung that come with big screen, high end specs and most importantly S-Pen. Last year was not favorable for Samsung due to Note 7 failure as the devices blew up and were even banned for carrying in the planes. So this year Samsung was under a lot of pressure to come up with a flagship device to appeal its disappointed customers whose Note 7 was lost to ashes. Finally Note 8 was unveiled by Samsung which comes with a power packed features. 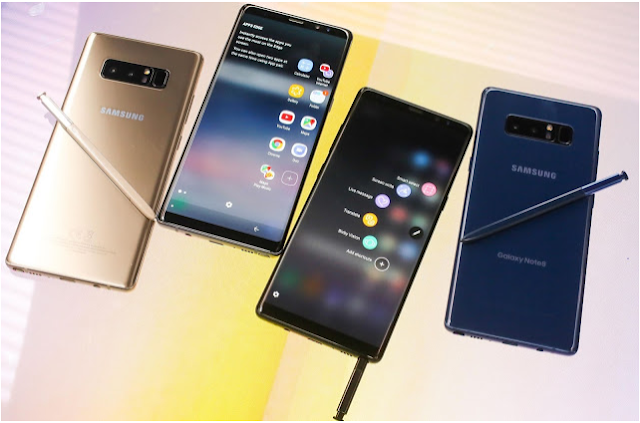 Galaxy Note 8 is premium device having  6.3-inch QHD Infinity Edge display which is absolutely gorgeous. Display have a weird aspect ratio of  18.5:9. Samsung made the curve less severe towards the edges unlike S8 and S8 plus. This comes in favor of Note 8 as it helps for more natural writing experience. As the display is big and have a weird aspect ratio, you get an extra room for running multiple apps so Note 8 comes with App Pair feature which allows you to run two apps side by side on the display with a single tap, such as the Mail and Phone app or Chrome and YouTube.

As majority of flagship devices nowadays comes with dual camera but it have its own limitations. This is not the case with new Note 8 since its rear camera comes with two 12-megapixel shooters and both have optical image stabilization (which is missing in all of dual camera flagship devices). So you should get steadier shots and footage when you zoom in and this feature is a new for smartphones. Device comes with 2x optical zoom which is fine as 3x zoom was rumored for the device. The Note 8 has done a better job than the iPhone 7 Plus with its Live Focus mode, which is equivalent to Portrait Mode on Apple’s phone. Unlike the iPhone, the Note 8 lets you blur the background both before and after taking shot. And at least based on early impressions, the feature works pretty well. Secondarily camera features 8 MP with autofocus, f/1.7 aperture.

According to said Wayne Lam, principal analyst for research firm IHS Markit. “The dual cameras is definitely an enhancement and should vie for the title of best phone camera."

Note 8 makes user feel more personal as you can create animated GIF for what you write (via the Live Messages feature). Four years ago, Samsung introduced the first Galaxy device with water resistance and now as technology grew you can take your Note almost anywhere you want, as it is water and dust resistance (IP685) and the S Pen. Interestingly you can even write on wet display. The Galaxy Note 8 supports the most advanced wireless charging capabilities, so you can get a quick charge without worrying about wires. The Galaxy Note 8 offers the choice of bio metric authentication including iris and fingerprint scanning. Samsung Galaxy Note 7 provides defense-grade security at the hardware and software layers and with Secure Folder, keeps your personal and professional data separate.

Device is powered by Qualcomm Snapdragon 835 (10nm) octa-core CPU OR Samsung Exynos 8995 (10nm) octa-core coupled with Adreno 540 (Qualcomm Snapdragon) OR ARM Mali-G71 (Samsung Exynos) GPU both are region specific. To boost the performance device is packed with 6GB RAM with storage options of 64GB, 128GB or 256GB. Most of the users will be disappointed with 3300 mAH battery on such a large beast but Samsung quick charge will help to tackle this problem. Also device comes with android Nougat. The one thing that Samsung missed is AR which is on hype these days  as Apple is getting all the attention with AR Kit, and with AR rumored to be a tent pole feature of the iPhone 8.

So Note 8 seems more of the same as Samsung, took sexiest phones in the market S8 and S8 plus, made it bigger by adding more features to it that is really impressive  for a device. Since the device have $930 as its introductory price and Apple iPhone 8 is on the edge of launching, its difficult to analyze whether user would be willing to spend money for this device.