August 16, 2017
Games are a structured form of play which are usually undertaken for fun and sometimes used as an educational tool too. Games are played purely for entertainment, sometimes for an achievement or reward as well.

Games can take precious lives too! Shocking? This is what you are going to learn about in this article. 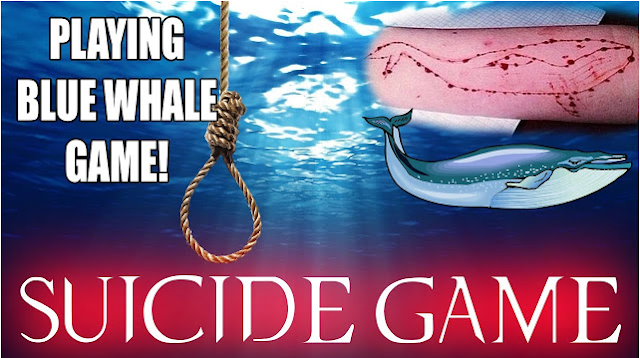 This is about Blue Whale, the suicide game. Inventor of the game Philipp Budeikin claims that he is 'Cleaning' the society by killing his players, considering them as 'Biological Wastes'.

Basically what is Blue Whale? Why is it in news? Why everybody is talking about it?
Here is the answer. This game has already taken 150 lives from around the world. This is a 50 day game then player does not live to play any game. There is no way back once started playing it, as the administrators threatens them for harming player or his loved ones as they have access to all of their information. The game is played totally underground, players are asked to play without letting anyone know about what is going on.

The 50 day game starts with little tasks of like watching disturbing movies, waking up at odd hours in night, drawing images of words or Blue Whale on their body etc. After completing each task player has to submit a proof of his task completion in the form of images or videos. Then on 50th day , the finale of the game, players have to take their own lives. There have been many incidents of suicides in which players posted on Facebook or other social media sites before ending their lives.

Recently a boy from Uttrakhand has been saved from taking his life by the school authorities. His parents claimed that he was behaving strangely from past few days, was not talking to anyone. The boy and his parents were counseled after the incident.

Who are the players?
Mostly the players who took their lives were teenagers. As this is a 'Game of Dares', consisting bizarre task, teenagers are attracted the most for playing this game. After registering to play the game, administrators start demotivating their players making them believe that they are nothing but a waste and a burden. Players are intrigued by the game and start countdown of their lives by starting this 50 days challenge.

Where to find the game?
If you're stupid enough to play this game then have to search hard. Assuming that the game really exists, it's not out in the open. You can't find the 'Blue Whale Challenge' on Google or Facebook. According to news, there are reports that the game exists in closed groups and also in private message conversations. It's said that the game administrators often choose their victims rather than the players choosing to play the game voluntarily.

Clicking any link like download game could expose a security vulnerability on your phone or computer that allows the admin to steal your personal data which they can use to blackmail, manipulate or trick you into playing. Perhaps you're just looking to play so that you can troll the admins, to expose them or to seek revenge but remember, anyone who encourages a vulnerable teen to take their own life is sick and you don't know what people like that are capable of.