July 20, 2017
When we are going to buy a new TV or Smart phone we often come across the term 'Resolution'. Resolution is the number of pixels contained in a display. It is expressed in terms of the number of pixels on the horizontal axis and the number on the vertical axis. The sharpness of the image depends on the resolution and the size of the display device. 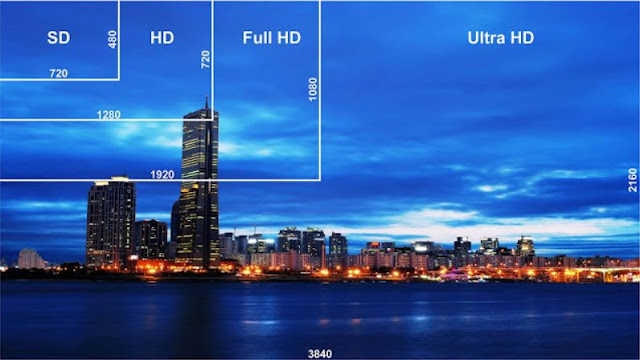 Let's start form the top of the list in the market 4K. It is new class of high-definition resolution offering unprecedented picture clarity and detail. 4K, Ultra HD or UHD these all refer to the same resolution of (3840 x 2160 pixels, or 4096 x 2160 pixels for cinema screens). Digital Cinema Initiatives have set horizontal resolution as  4,096 pixels and it is known as 4K

Besides enhancing your viewing experience, higher resolution 4K Ultra HD TVs also allow you to sit closer to a screen and view a larger screen without seeing pixelation of scenes. Due to this manufacturers are able to provide excellent picture quality for larger TV's with screen sizes of 80 inches and above.

Full HD refers to the resolution of 1920 × 1080  pixels thus giving 5 times more details than SD(Standard Definition). It is the standard resolution for Blu-Ray, Digital television, and most HD videos found online. But some user's are confused between the terms 1080i and 1080p so here is the clarification for the same!

In Interlaced scan one-half of the horizontal pixel rows are refreshed in one cycle and the other half in the next, meaning that two complete scans are required to display the screen image. Thus rendering every line in 1/25th of a second. Odd-numbered lines get painted on the screen first and then even numbered lines. It can create flickering effect on live TV broadcasts such as live sporting events.

Progressive scan renders images sequentially, all at once. This makes for a much smoother image so it doesn't cause flickering effect. 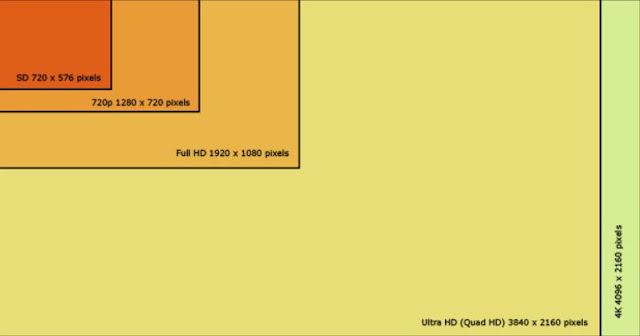 720p usually known as HD or “HD Ready” has a resolution of 1280×720 px. It follows from standard definition and provide more than twice the detail of standard definition, which makes for reasonably sharp video playback on a standard TV.  So HD TV will only be able to display video at the resolution of no higher than 720p. Thus if you are streaming 1080p content it wont give you much richer experience but provide the experience of 720p resolution.

So weather you buy a 4K, 2K, Full HD or HD TV you can still play the 4K video on lower resolution TV but the TV will not provide you resolution more than its ability.

So now you can take a wise decision while shopping for a new TV/Smartphone.