July 09, 2017
Android operating system come a long way over the years and every year new version are released by Google. Android suffers from fragmentation issue and Google is aggressively fragmentation issue. As the matter of fact few of Android's 1.4 billion users use the latest version of the operating system. Apple's iOS enjoys benefit of healthy adoption rates but in case of android whenever software rolls out manufacturers take a long time to provide software update. Google is devising various methods/strategy’s to tackle this issue with a mediocre success.

Google released its monthly platform distribution chart and highlighted the changes that occurred within the past week. Now Android Nougat hits double digits in terms of market share. According to the updated data Android 7.x Nougat is now on 11.5% of Android devices, up 2% from the previous month. 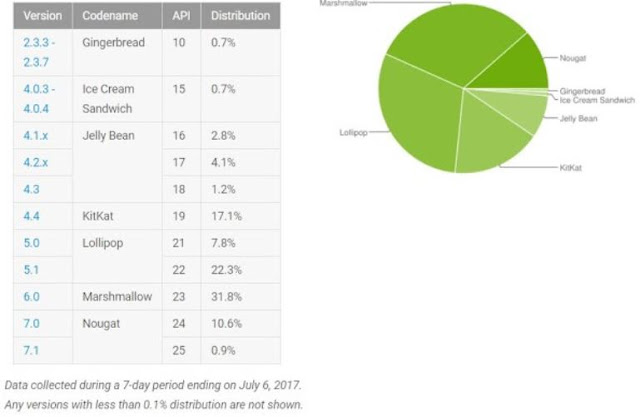 Android 7.0 Nougat is currently used by 10.9% active users while Android 7.1 Nougat is running on 0.9 percent of active devices. Now, in mid-2017, we're approaching the release of a new Android version 8.0, but the current standard, Nougat, has just reached a new milestone: a tenth of all Google Play-supported Android phones.

The only other version to rise in July was Marshmallow, version 6.0, which gained 0.6% from 31.2% to 31.8% market share last month and is gold medalist of the market followed by the silver medalist Lollipop(5.0 and 5.1 combined) having 30.1% market share. The updated numbers are based on data collected during a 7-day period ending on July 6, 2017.

Unfortunately, Android 4.4 KitKat commands 17.1% of the chart, even after many years of its release. All the older versions are at 9.5%, thus Gingerbread, Ice Cream Sandwich, and Jelly Bean are thankfully on the way out.